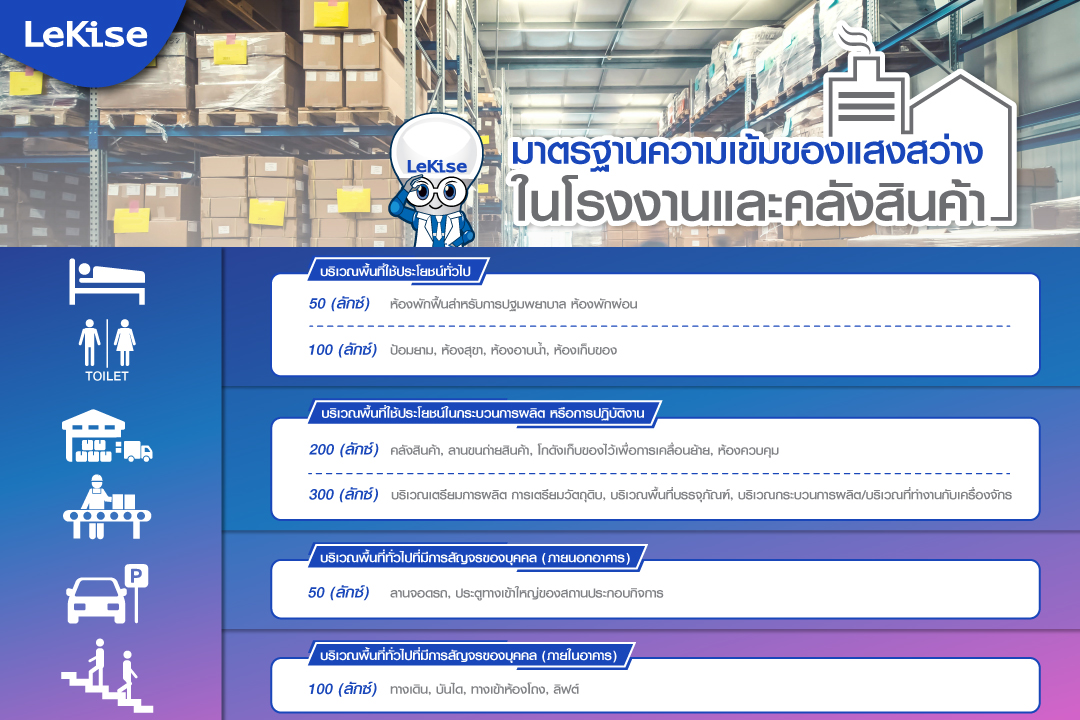 Lighting in factories and warehouses Many factors must be taken into account. Both in terms of light intensity, light control, light direction, adequacy of illumination in that area.

And most importantly, should consider the efficiency of the vision of the eyes. Because if there is too little light, it may affect the eyesight, eye fatigue, dizziness.

resulting in reduced performance and may cause accidents at work If the light is calculated well enough It will help to work more efficiently.

in each area of ​​the factory and warehouse There are different uses.

Today, LeKise will come to know about Light intensity standards in factories and warehouses According to the announcement from the Department of Labor Protection and Welfare

Subject: Standards for Light Intensity, announced on 27 November 2017 and still in force until now.

by requiring the employer to arrange the workplace to have the intensity of light not lower than the announced standard Each area is divided the lux (Lux) as follows.

1. Areas of general use

2. Area used in the production process or performance

3. Areas in general areas with traffic of people (outside the building)

Areas where an average illumination intensity of 50 (lux) is required : parking lot, main entrance of an establishment.

4. Areas in general areas with people's traffic (inside the building)

Therefore, if we arrange lighting in a working area, it works well. will result in efficient work and enabling the production of standardized products to the consumers

Announcement of the Department of Labor Protection and Welfare regarding the standard of light intensity is not only this Next time Lekise will come to give knowledge. Don't forget to keep following.

We use cookies on our website to give you the most relevant experience by remembering your preferences and repeat visits. By clicking “Accept”, you consent to the use of ALL the cookies. Learn More
Accept
Back to top